There was an historic dance event this month when the Royal Ballet presented its first new full length ballet in 16 years. Christopher Wheeldon, tipped by some to be the next director, chose an archetypal English story.

Alice’s Adventures in Wonderland is peopled by a host of colourful, well known characters but its episodic satirical wordplay is not an easy subject for a ballet. A long 70 minute first act and a 25 minute second act, where most of the dancing happens, strike an uneasy balance. 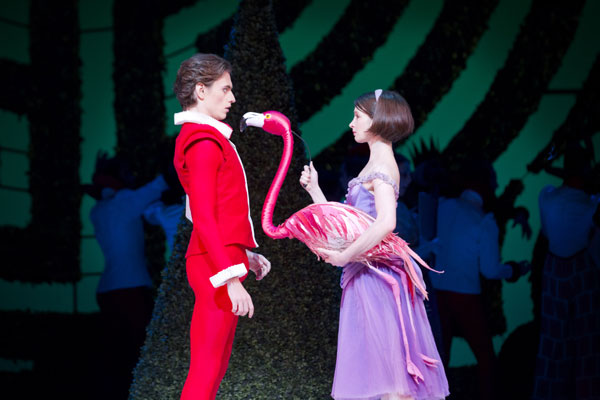 However the staging is spectacular as designer Bob Crowley, using all the tricks of his trade, brings the stage alive with gadgetry and projections. Interestingly and despite the electronic wizardry, it is the Cheshire Cat whose body parts magically disperse and reassemble with old fashioned hands-on manipulation by a skilful team of puppeteers who elicited the most oohs and aahs.

Sarah Lamb as Alice captured the feistiness of Lewis Carroll’s heroine but as her literary purpose is as a device to validate the other characters: she is doomed to spend much of her time reacting with amazement to their antics. Wheeldon has to some extent circumnavigated this problem by introducing a love interest. (For those worried about the legal implications, Alice is played as a teenager rather that the original 7 year-old!)

Jack the gardener/ knave of hearts/ boyfriend finds an appropriate interpreter in the handsome Federico Bonelli and provides a few welcome pas de deux. In an interesting twist their initial duet in Edwardian dress is reinterpreted in modern dress and style to close the ballet. This enables Wheeldon to work in his natural neoclassical métier.

In much of the first act his talents are curtailed by scenic effects and characterisations so it is in the extra-narrative moments that the choreography triumphs. The neat, witty male trio that opened act two, superbly danced by James Hay, Dawid Trzensimiech and Valentino Zucchetti, and the ensemble dance for the pack of cards showed Wheeldon at his best. Joby Talbot’s score complemented with an edge of excitement; an edge that had been blunted in the candyfloss corps de ballet scene in multicoloured tutus that closed the first act. 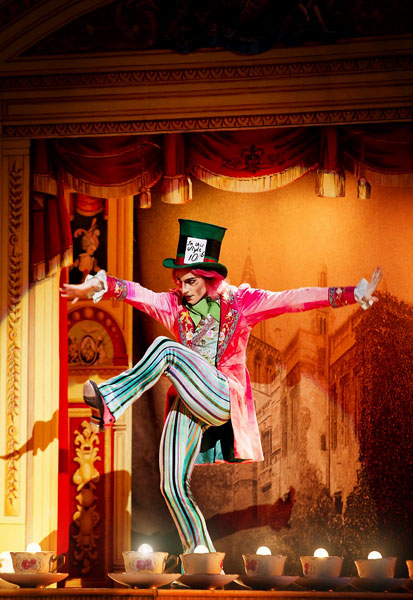 Tamara Rojo as the Queen of Hearts has a dream of a role, which she plays at an incandescent level. Her entrance in a tower of a red dress evolves absurdly into a pastiche of the Rose Adage which brought the house down, the audience loving it as much as Rojo herself.

Steven McRae as a tap dancing Mad Hatter and Eric Underwood as the caterpillar flanked by a Busby Berkeley team, tops hidden under the caterpillar shell whose pointes in clever unison become hundreds of legs, are both entertaining.

Most disappointing was legendary actor Simon Russell Beale. Cast as the Duchess, one of Carroll’s darkest and most disturbing creations, he became no more than a watered down pantomime dame. The ballet will no doubt join Tales of Beatrix Potter as fun Christmas fare but as John Neumeier’s Sylvia opens in Amsterdam just across the water, I can’t help wishing we had some more adult ballets here.

Ballet Black
At the smaller Linbury Theatre Ballet Black celebrated their tenth anniversary; a triumph of survival against the odds. The programme ranged from early works like Denzil Bailey’s A New Beginning, which still maintains its bloom of youth, Martin Lawrance’s Pendulum a tough talking duet by Cira Robinson and Jazmon Voss, an exciting American pair who have now been with the company several years.

A new commission Orpheus by William Tuckett to Stravinsky’s score struggled with the story line and in the small space/ small cast setting might have worked better following a more abstract thread.

Forsythe at Sadler's Wells
William Forsythe Company appeared at Sadler’s Wells. His last few choreographic offerings in London have been incisive contemporary works that make dance feel part of the real world. However he thought it was time for a touch of comedy and presented I don’t believe in outer space, which was maybe not such a good idea. Doing comedy is seriously scary; the most experienced know that laugh is never certain.

Even Tilman O’Donnell, whose comedic talents have delighted Swedish audiences, had little chance to make an impact. However there were small treasured moments of dance when these wonderful artists came into their own.

Tudor revival at American Ballet Theatre
American Ballet Theatre’s visit was memorable for a blistering new work by Benjamin Millepied and a luminous revival of Anthony Tudor’s Lilac Garden. In this gentle masterpiece where each glance and gesture speaks a thousand words, and the restrained exteriors hold back a torrent of emotion, Julie Kent gave the performance of a lifetime. 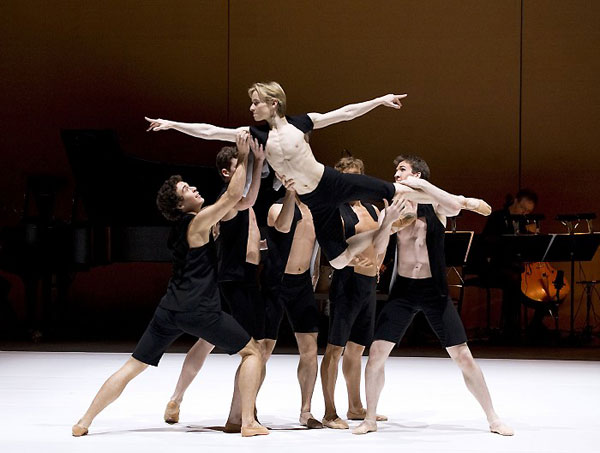 Daniil Simkin and ensemble in Everything Doesn't Happen at Once. Photo Gene Schiavone

Millepied’s Everything Doesn’t Happen at Once to a blistering score by David Lang features sharp minimal designs and choreography that, after a casual unstructured warm-up evolves into his most exciting work to date. He shapes the ensemble scenes with confident ease while the central duet from Isabella Boylston and Marcelo Gomes touched an emotional chord.

The exceptional talents of Daniil Simkin were exploited allowing the audience to gasp at his exuberant leaps and spins while never unbalancing the work which is a  valuable addition to the repertoire.