A rather miserable London summer rounded off with a sunny weekend for the Notting Hill Carnival when exotically costumed dancers and musicians take to the streets for Europe’s biggest street party.

When it started in 1964, the carnival was a celebration of Caribbean culture but by the 90s it had expanded to include Brazilians and other ethnics groups to better reflect the vibrant London mix. 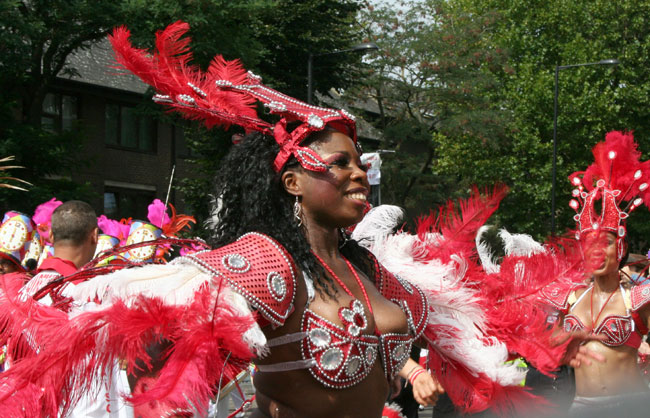 Music from the steel bands can be heard long before you get to the route and mouth-watering aromas from food stalls offering chicken jerk, curried goat and Jamaican patties assail your nostrils. The extravaganza of dancers, magnificently decorated floats all in a blaze of colour continues through the day to the cheering crowds. It’s a great day out. 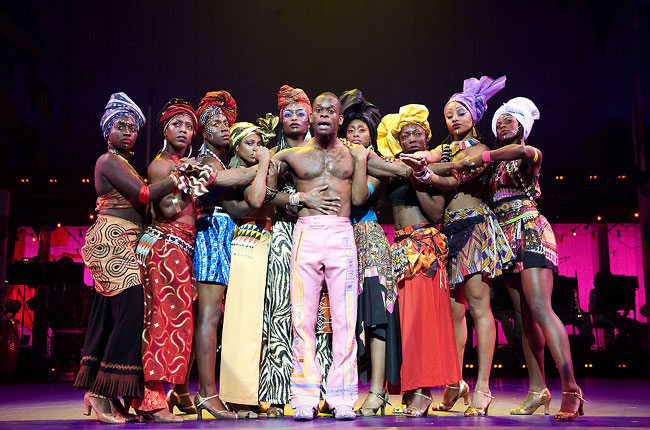 An African Legend
Complementing the exotic theme, Fela! the musical returned to London to play a short season at Sadler’s Wells. Choreographed by Bill T. Jones it is based on the life of legendary Nigerian performer Fela Anikulapo-Kuti, creator of Afrobeat. Jones builds on traditional Nigerian dance and weaves it with a very light touch to support the narrative, the events of Fela’s final concert at ‘The Shrine’ in Lagos.

Sahr Ngaujah, takes the lead in a dynamic performance that draws on all his talents: acting, dancing, singing and musical skills. Having seen one of Fela’s last performances in London, I can say if you were not fortunate enough to catch the real thing, this show is a remarkably good substitute.

Fela was adored both at home and by the Nigerians in exile for his outspoken condemnation of the corrupt government of the time and for the delivery of his political message in fabulous African song and dance. An international cast captured the excitement and had the audiences dancing in the aisles. 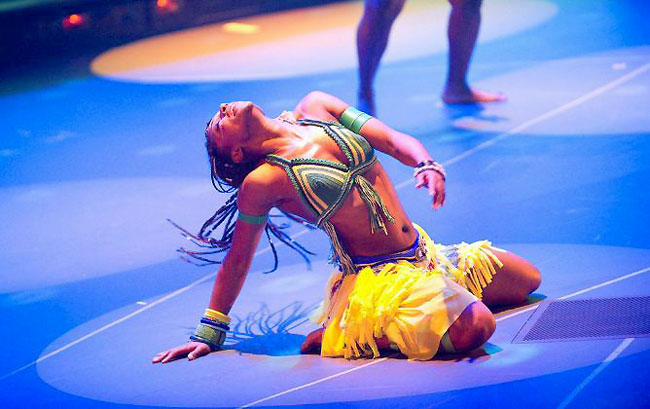 To enter Cherkaoui’s world is like entering an enchanted cave peopled with magicians who delight your eyes and ears with wondrous sights and sounds but following the ethos of Tezuka, horrors are also part of the rich pattern.

The performers were rehearsing in Japan in March when the great Earthquake and Tsunami hit, the event is woven into the show as the Japanese red sun becomes a black ball, falls into the sea and in turn becomes the wave enveloping the stage to close the first act.

Manga is a graphic form with no taboos. As Cherkaoui described, "Tezuka’s vision was without prejudice. He allowed everything inside his world." Cherkaoui also trained as an illustrator and seamlessly marries the drawings with the movements. This found particularly strong expression in a martial arts scene; as a punch is translated simultaneously, and excitingly, into the ‘Ka-pow!’ of the cartoons. 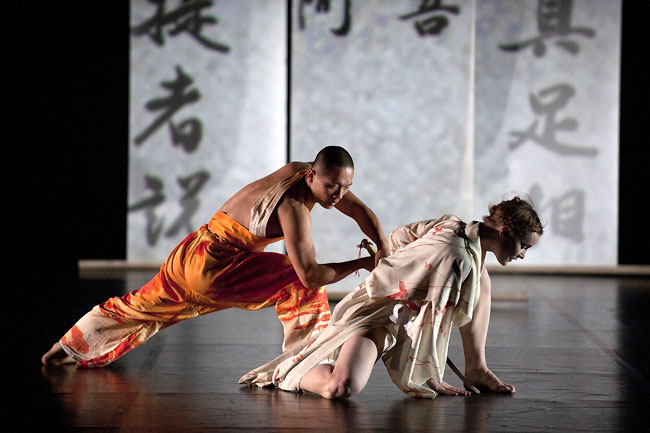 Excellent Dancers
Astro Boy, one of his iconic manga characters, is played by Kazutomi Kozuki. Childlike but knowing; his movements are fragmented but there is an appealing resilience in his muscles that matches the bounce in his red rubber boots. Daniel Proietto, whose fluid coordinated dance has earned him numerous awards, showed his versatility, taking on a variety of acting roles and running the gamut from serious to high camp.

Guro Nagelhus Schia, one of three Norwegians in the cast, combines fragility and strength in some truly beautiful dance while Helder Seabra, who opens the show a comic book gripped between his toes like a tumbling clown, is partnered with Proietto in a sensual duet full of original shapes and movements.
Nitin Sawney’s commissioned score colours the images with sounds drawn from across the globe including ex-Kodo drummer, Tsubasa Hori while calligrapher, Tosui Suzuki and video artist, Taiki Ueda, were on hand to create the ephemeral images that blended so successfully with the choreography.