Two weeks in the Johannesburg sun in the middle of February can’t be a bad thing and when it coincides with the Dance Umbrella Festival, the platform for contemporary dance and new choreography, things get even better.

The old South Africa boasted a high standard of classical ballet but the Johannesburg company (PACT) followed British culture slavishly, a sort of ‘Royal Ballet in the sun’, but now in a period of cultural transition, contemporary dance, that does not carry the colonial baggage of ballet, is taking centre stage.

This is also the result of underfunding, lack of regular and affordable training but, most importantly, contemporary dance is a more suitable vehicle for choreographers to explore social issues. 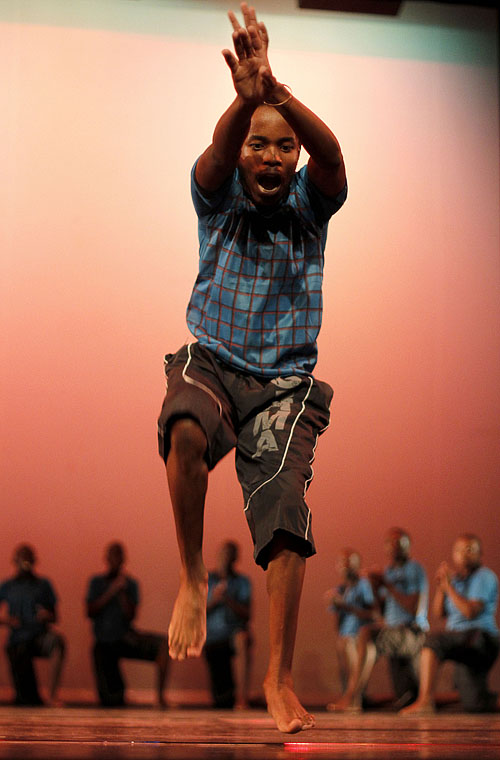 In wider society there is a struggle to preserve African traditions as youngsters succumb to Western commercialism and those born into the new democratic South Africa and not involved in the years of struggle are seen to lack motivation. But this was certainly not the case at the weekend, ‘Stepping Stones’ platform where newcomers who had not qualified for main stage performance had the opportunity to show their works.

The themes of new choreographies ranged from serious social issues like xenophobia and homelessness to works of sheer entertainment. Here the fusion of street dance, qwela township rhythms and pantsula danced in mineworkers’ gumboots was creating a whole new African dance tradition. The buzz from dozens of enthusiastic dancers, sorting costume bits, rehearsing in odd corners or conducting post-mortems in the sunshine outside, was simply tremendous.

In Exit/Exists Gregory Maqoma tells the story of his tribal inheritance how his ancestor, the Xhosa Chief Maqoma, had fought the British to defend his land and cattle. It opens with Maqoma writhing as though to escape from his body, the movements evolve and take on traditional rhythms as he searches for his indigenous soul finally stripping down to African dress.

In a series of striking images; a shower of salt or traceries of sand in floor patterns, dramatically lit and accompanied by a thrilling a cappella quartet, he follows the warrior leader to his exile and ultimate death on Robben Island in 1873.

Conversely Nelisiwe Xaba, an engaging performer, brings the traditional into the present in Uncles and Aunts, working with video artist Mocke J van Veuren who creates an ensemble of images to accompany her solo performance. 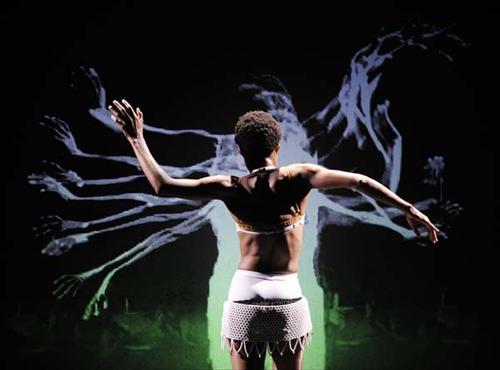 Xaba tackles head-on the serious issue of exploitation of young girls, taking an ironic look at the Reed dance a pre-marriage ritual for girls that has been exploited both by the tourist trade and by tribal leaders. Her choreography and the videos effectively run the gamut from excited twitter on mobile phones between the girls as they present themselves for selection, to the gross humiliation of virginity testing. 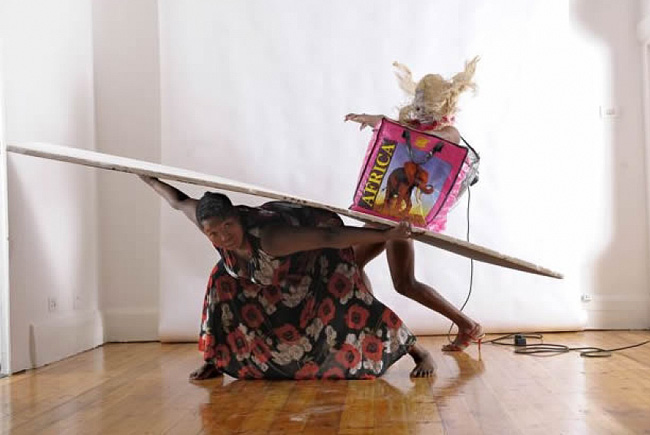 The action is mostly played out on the trading floor where the history of fortunes won and lost shadows the immediacy of the choreography. Panther’s keen sense of theatre is alive to the possibilities of the space and sharp episodes, cleverly costumed and dramatically lit follow the downfall of Caesar with allusions to current political events. Although in need of serious editing to maintain the dynamics and keep the coherence, it was one of the most interesting productions.

Some of the strongest choreography and best dance performances came from Alfred Hinkel’s Dansmetdieduiwels (Dance with the devils) a harrowing story of paedophilia and a priest. Hinkel is a veteran of the South African dance scene and former director of JazzArt in Cape Town. His new company, Garage, is based in the Northern Cape and it was a treat to see such well trained dancers. Set to music by Bach and backed by ecclesiastical projections it made a powerful statement.

The Festival also saw diaspora artists returning to present works, including Vincent Sekwati Mantsoe and Melody Putu whose production Faith was the subject of "Dansportalen Jönköping satsar på unga dansare". Dance Umbrella under the direction of Georgina Thompson, has become a cornerstone of contemporary dance and despite constant threat of financial foreclosure will hopefully celebrate its quarter century next year establishing contemporary dance as a cultural force in the new South Africa.