Of the two world premieres, Firebird drew interest as the first major work from 22 year old company dancer, George Williamson.   Although the central environmental concept needed serious sorting, Williamson showed a confident command of choreographic structure and an imaginative use of ballet technique. 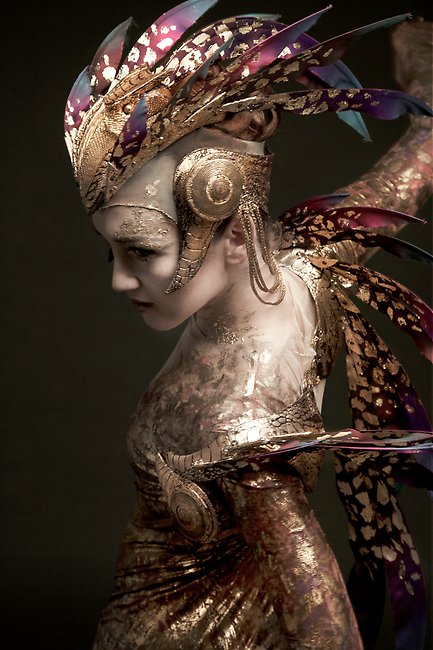 Magical Firebird
Ksenia Ovsyanick as The Firebird was truly magical in shimmering body tights and a gorgeous feathery headdress (costumes by David Bamber).

She captured both the majesty and vulnerability in her performance while Junor Souza, as the Army Captain, nearly stole the show in a brilliant virtuoso solo.

Jeux, Nijinsky’s ballet of 1913 to Debussy’s score, was re-imagined by Eagling. It opens as the choreographer/ Nijinsky figure, a convincing Dmitri Gruzdyev, wrestles with his ideas.

A tennis ball is lobbed across the stage followed by two young women and the play, flirtatious and sporting, ensues.

A second trio of two men and one woman make up the numbers in a compelling work where the relationships and the choreography are woven into a mysterious web of many strands.

This is Eagling’s best work to date and I hope it finds a continuing afterlife.

Jeux was paired with the Handsome Young Man solo from Nijinska’s Le Train Bleu given a deliciously wry performance by Vadim Muntagirov. 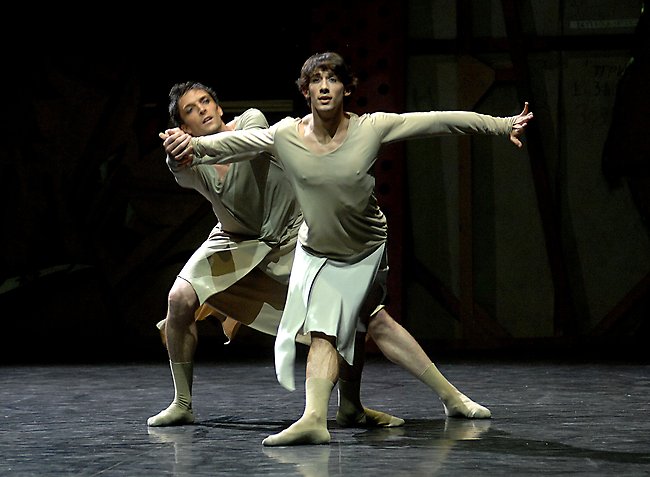 Faunes then and now
The pairing in the first programme was Nijinsky’s Faune with David Dawson’s Faun(e). The two choreographies span a hundred years, as the orchestral score is pared down to the two piano version and the lush Bakst set is stripped down to an almost bare stage; an inspired contrast.

Anton Luvovkin captured the feral instincts of Nijinsky’s Faune in this difficult role that is as much about being as doing. Raphael Coumes-Marquet and Jan Casier interpreted Dawson’s modern version in ravishing movement paying tribute to the past while celebrating the future.

Tamarind Stott made a triumphant debut as the Chosen Maiden in Kenneth MacMillan’s Rite of Spring. Her expressive face and hands singled her out from the group and her fatalistic compulsion drove her to the end.

The production has been newly designed by Kinder Aggugini losing some of the tribal aspects but compensating with an urban grunge look, the darker patterns finely shaping the dancers’ muscles. 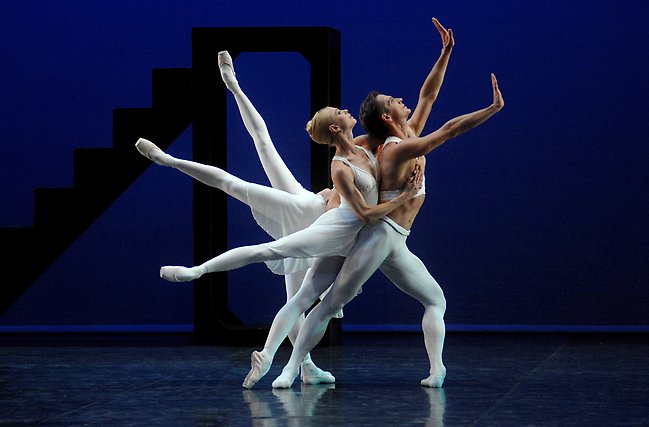 Balanchine’s Apollo is unique, written when Diaghilev was still alive it retains its youth and vigour.  Zdenek Konvalina was a confident young god with an easygoing authority as he keenly appraises the muses; his clean classical line and powerful attack an added bonus. His consort Daria Klimentova was a radiant Terpsichore,

Begoña Cao added a dash of self deprecating humour to her Calliope solo while Anaïs Chalendard enhanced the bevy of well-matched arabesques with her beautiful legs. Muntagirov made his debut in the role in a later performance, bringing a sense of delight and newness. This young dancer, one of the most elegant technicians on the English stage, has reached a new level of confidence this season. 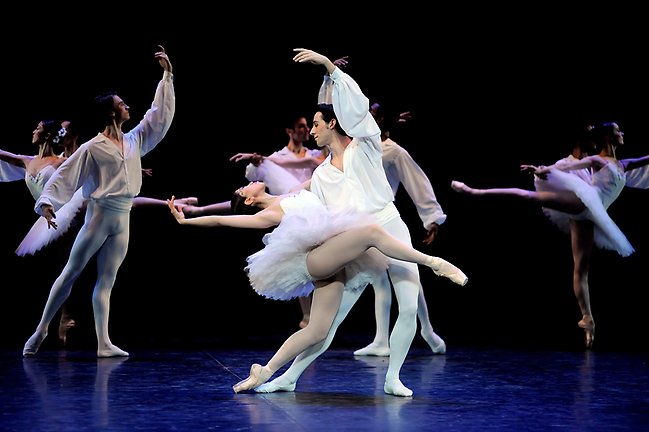 Suite en Blanc closed the second programme on a high. The ballet which was a signature piece in the rep of the old Festival Ballet was revived from last season and now fits like a glove. It offers so many good small roles, notable were Yonah Acosta who danced the Mazurka with great style and ease, and Elena Glurdjidze who has made the sensual ‘cigarette’ variation so absolutely her own.

The company is on peak form and this has been a truly memorable season. Sadly it will also be remembered as the last season with Wayne Eagling as director. The board, none of whose members have any artistic expertise, have seen fit to dismiss the man who raised the company to this standard.

Memorable new works at the Royal Ballet
At the Royal Ballet a revival of Alice’s Adventures in Wonderland is drawing crowds of very young fans. The video effects pale somewhat after multiple viewings and unfortunately there is not a great deal of dance to compensate. However Beatriz Stix-Brunell as Alice was a delight, looking little more than a child herself she threw herself into the role with glee; living every moment while Ricardo Cervera as the White Rabbit provided the stability to hold the whole bag of tricks together.

In the new triple bill, Liam Scarlett’s latest ballet, Sweet Violets, was keenly awaited. This is his first narrative work and is based on the life of the painter Walter Sickert. Scarlett proved a sure hand in creating characters through dance but the story, a psychological thriller of sorts, is complicated and it is often difficult to distinguish the various characters.

Johan Kobborg, one of the company’s best actor/ dancers, unlocks the depth and inner torment of the troubled artist and Steven McRae plays the ambiguous role of Jack who blurs the edge between the artist’s desire and the murderous deed. The women are sad characters, their brief lives ending in madness or violent death supported by Rachmaninoff’s haunting music.  Its a memorable work that rewards further viewing.

One of Wheeldon's best works

Polyphonia, to György Ligeti’s piano music, is one of Wheeldon’s best and looks a treat on the company.

Wheeldon has cast some of the youngest dancers and I loved Yasmine Naghdi partnered by James Hay in the slow duet leading into her gentle solo where she held the stage with quiet dignity.

Sarah Lamb was ever beautiful while Dawid Trzensimiech continues to grow in stature.

Wayne McGregor’s new work Carbon Life was infuriating. It featured some of the company’s top dancers doing party tricks in designer chic outfits to a score of devastating banality.

Maybe its time for this obviously talented choreographer to slow down to ensure a quality standard.