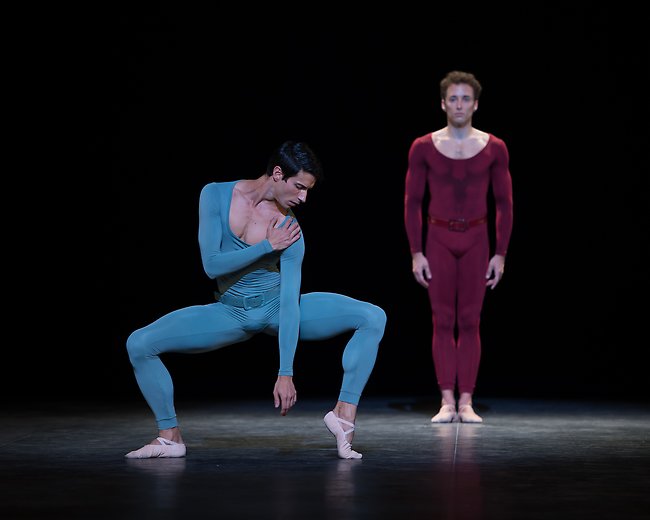 Francisco Bosch and Fabien Reimair in Songs of a Wayfarer. Photo Arnaud Stephenson

A Tribute to Nureyev 20 Years after His Death

LONDON:  It is 54 years since a passionate young dancer made a dash to freedom at Le Bourget airport in Paris. Rudolf Nureyev was already a star at the Kirov and he mesmerised the ballet world who promptly crowned him ‘the new Nijinsky’ when he arrived in the West.

Every ballerina of note vied for his attention and his partnership with Margot Fonteyn was legendary despite the discrepancy in their ages. His enthusiasm to develop and expand his art knew no national boundaries. He travelled the world to engage with innovative choreographers.

He worked with Birgit Cullberg in Stockholm, dancing Jean to Ana Laguna’s Miss Julie, in Amsterdam he danced with the Dutch National Ballet under Rudi van Dantzig and in Brussels with Maurice Béjart.
English National Ballet has harnessed the legend to their cause presenting a ‘Tribute to Rudolf Nureyev’ programme. By far the most interesting work was Maurice Béjart’s, Songs of a Wayfarer, the duet written for Nureyev and Paolo Bortoluzzi in 1971.

Structured round classical motifs, Wayfarer explores the emotional relationship between the two characters who could be interpreted as destiny and seeker, or guide and traveller. It highlights the fine technique of both Francisco Bosch, in the Nureyev role, and Fabien Reimair. Their classical lines stood the test but the effort was at times evident.

For a work about the journey through life, one can’t do better than chose Gustav Mahler for company. His Lieder eines fahrenden Gesellen, is intensely evocative. It stirs deep longings and adds the tingle factor to the piece. While there was no epiphany moment, the dancers succeeded in initiating an interesting emotional journey, which augurs well for future performances. 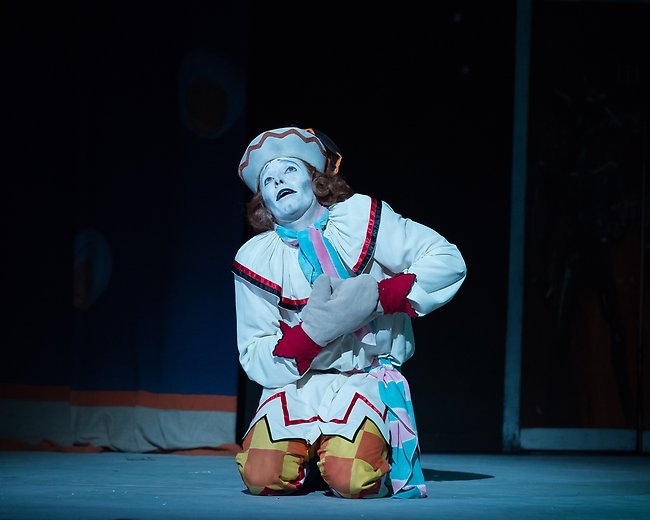 Petrushka was one of Nijinsky’s favourite, if not most memorable, roles. The ballet replete with Russian period charm has little to do with technique but needs intuitive handling of the drama to succeed.

Inhibited by an unimpressive documentary film that preceded, the ballet couldn’t achieve lift off. The fairground was too ordered, too rehearsed and predictable despite the attempts of a lively corps of dancers to inject some spirit.

Anton Lukovkin, as Petrushka, gave a sensitive performance but in this prosaic setting that lacked the contrast of boisterous worldliness, he struggled to create the hopelessness of the sad puppet.

However there was Raymonda to bring the performance to a stimulating climax. Nureyev was responsible for bringing this ballet to London and although the one act version is little more than a string of variations with ensemble interludes, the stylistic mix of Hungarian nationalism spiced with the undertones of oriental mystery in Glazunov’s music has ensured its success.

Nestling in this high camp extravaganza is a ballerina solo that is one of the most glorious in the ballet repertoire and in Elena Glurdjidze, a dancer who combines sensuality and womanliness, it had a fitting interpreter.

She weaves a magic spell as she circles her arm to cushion her head Czardas style and brings a touch of royal arrogance to the tilt of her chin before melting into a tremulous bourree. And when she flashes her glorious smile you are so grateful to be in the audience.

The ensemble, peppered with soloists at this performance, did the ballet proud notably Erina Takahashi in a beautifully phrased third variation embroidered with delicate ports de bras and Crystal Costa, a sparkling gem in the lively fourth variation. 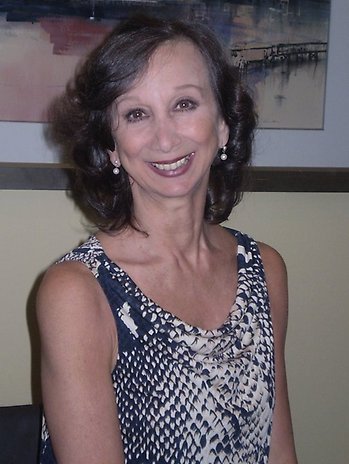 Maina Gielgud remembers
In the weeks after the performance, I had the chance to interview Maina Gielgud, who worked with Nureyev on many occasions. Gielgud was a truly international ballerina and remains a globe trotter.

She was director of the Australian Ballet and the Royal Danish Ballet among others and has been working as a freelance artist since 1999. She was a principal dancer with Festival Ballet, now English National Ballet, and has enjoyed a close relationship with the company staging ballets and coaching principals.

In 2012, she staged Rudolf Nureyev's Don Quixote for Boston Ballet and Maurice Béjart's Song of a Wayfarer for the National Ballet of Canada.

What is your most powerful memory of Nureyev?
Just his face - and his sense of humour. He would make the most outrageous remarks and jokes and then just break up laughing. He had such mischievous eyes which he used so well – when it was called for – in his dancing.
It was very evident in the way he danced Basilio in his production of Don Quixote for the Australian Ballet. If one looks at the old film (with Lucette Aldous) you get to see all the mischief there.

He was such a contradiction: a superlative male dancer with a sense of humour. I loved that. He worked hard and played hard. You had to have tremendous stamina to do that but he was truly amazing.

What do you consider was Nureyev’s main contribution to dance?
He was certainly one of the important people responsible for overriding that ridiculous dividing line between so called modern or contemporary and classical, something with which I have no patience.

He sought out and worked with many important contemporary choreographers?
Yes, he worked with Maurice Béjart and in America with Martha Graham and Paul Taylor. And then we look at what he has left us.

He raised the bar, for male dancers certainly, but also for the females. Those who dance in his versions of the classics, my God, they need to pull their socks up.

Every time I go to stage one of his works, I think, ‘yes, thank you Rudi’, because unless you work very hard, you are not going to be able to do what he asks.

He had a reputation for being temperamental and explosive. Would you say that was justified?
Well, he didn’t suffer fools. When I did Sleeping Beauty with him we had a day and a half rehearsal and it was the first time I had done the full length ballet.

I had come from Béjart’s company and was guesting with Rosella Hightower’s Marseille Company. The performances were in Barcelona on a terrible rake.

We met in the tiny downstairs studio, worked on the pas de deux together and then did the dress rehearsal. But he couldn’t have been nicer and he was so helpful. It was a wonderful experience and after we went to dinner on Las Ramblas. That’s where he taught me how to mop up a steak. It was not as fat free as he had asked for, so he mopped it with his napkin; a habit which I promptly copied! 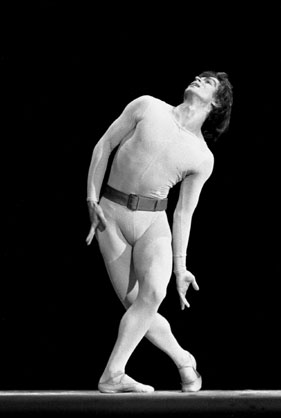 Nureyev in Songs of a Wayfarer.

Last year you staged Maurice Béjart’s Song of a Wayfarer for the National Ballet of Canada. You have an intimate relationship with this ballet?
Yes, I was there when Maurice choreographed it on Nureyev and Paolo Bartoluzzi. I watched every single rehearsal. It is a ballet that is so special, so wonderful for the men who do it. They all say the experience is really miraculous and that it changes them.

When you are casting, what are the qualities you look for?
Technique of course, but most important is the personalities and the rapport. Like a pas de deux between a man and woman, you need to have the right relationship.

The man in blue is the one who is the more lyrical and romantic and the one in red needs to be dominating and powerful. Those are the main emotional characteristics but it is really very classical.

It is virtually 18 minutes non-stop so it takes immense stamina and also takes it out of one emotionally. It’s a wonderful ballet to come back to. You can do it at all different ages and it will have different relevance.