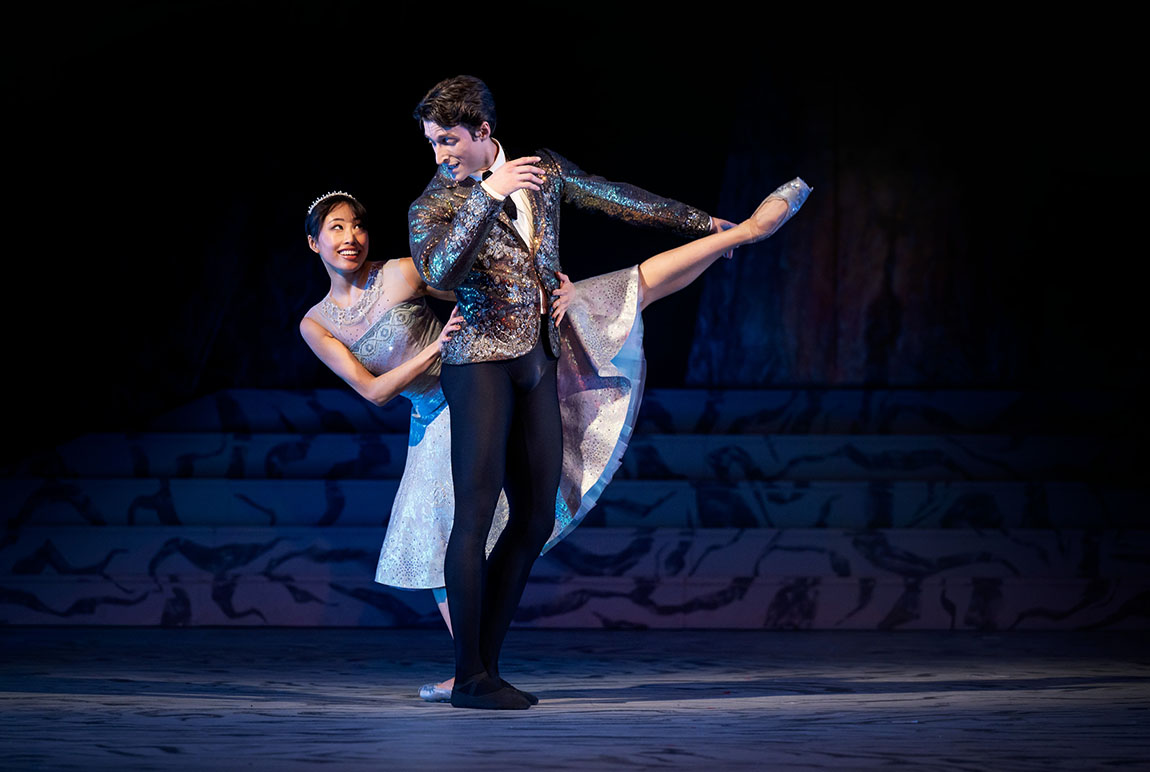 The opening cast, Madeline Woo as Cinderella and Gianmarco Romano as her Prince, created the romantic magic. Photo Carl Thorborg

Tamara Rojo’s new production of Cinderella in Stockholm is successfully adapted to current themes. Cinderella is a refugee washed up on the shore still clutching a precious photo of her family. Two policemen find her and deliver her to an orphanage. There, as in the fairy tale, she is bullied, this time by the headmistress and her two insufferable favourites. 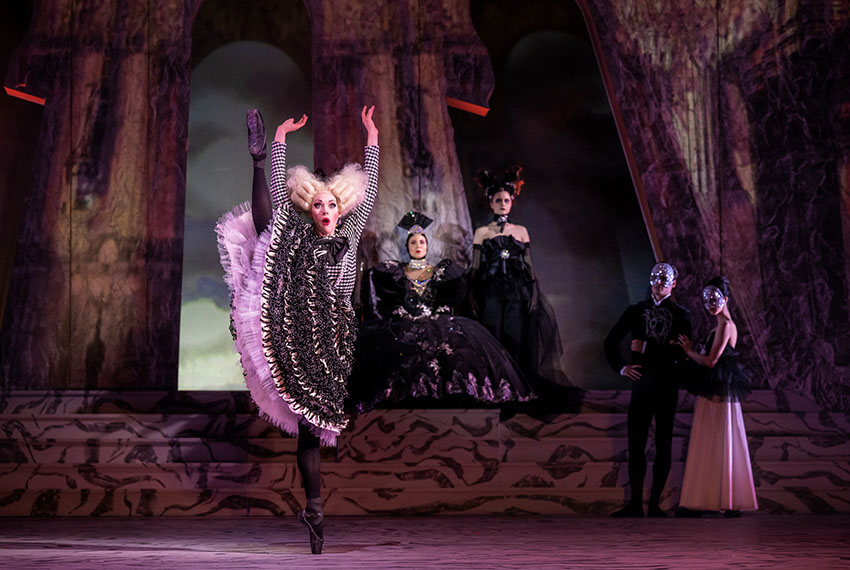 To great excitement the orphans are invited to dance at the Prince’s birthday party but there is no invitation for Cinderella. Left alone in the kitchen the other workers, the cook and cleaners, magically transform into the four seasons and help her transform into the belle of the ball.

And the rest, as they say, is history. In an afternote, Cinderella finds her father. He is a tramp who has one brief scene where he collapses dead drunk but comes back to claim his daughter when she is about to marry the Prince. Distinctly odd and possibly taking inclusivity too far.

The new storyline works well for this shorter version of under two hours. The action moves at a brisk pace helped by remarkable projections, by Tobias Rylander, which minimise scene changes.

The costumes by Christian Lacroix are, as to be expected, quite spectacular. The Four Seasons, except Winter in pristine silvery white, are attired in commedia dell’arte silhouettes and a kaleidoscope of patterns and colours that quite steal the show. At this level there is much to enjoy: a company of talented generous dancers,

Prokofiev’s magic melodies telling a story in a fairy-tale setting but the choreography is sadly in need of style and form.

The final scenes are his desperate search to find the beautiful creature who wore the glass slipper. Photo Carl Thorborg

The opening cast, Madeline Woo as Cinderella and Gianmarco Romano as her Prince, created the romantic magic. Their solos are fiendishly difficult, demanding a full range of technical ability but they succeeded. Woo is on stage for much of the evening and maintained her character throughout. Gentle and kind, she is constantly caring for any of the nasty brats who need assistance despite their bullying. She is also courageous, bravely setting her sights on a better future and following her dream.

Romano only arrives in Act Two and enters as a bad tempered, privileged young man. Sighting Cinderella, his better nature prevails. He recognises in her vibrancy and love of freedom what he lacks. The final scenes are his desperate search to find the beautiful creature who wore the glass slipper. In this he is assisted by his long-suffering friend, William Dugan, who fast footwork and razor sharp batterie, have him leading the chase. 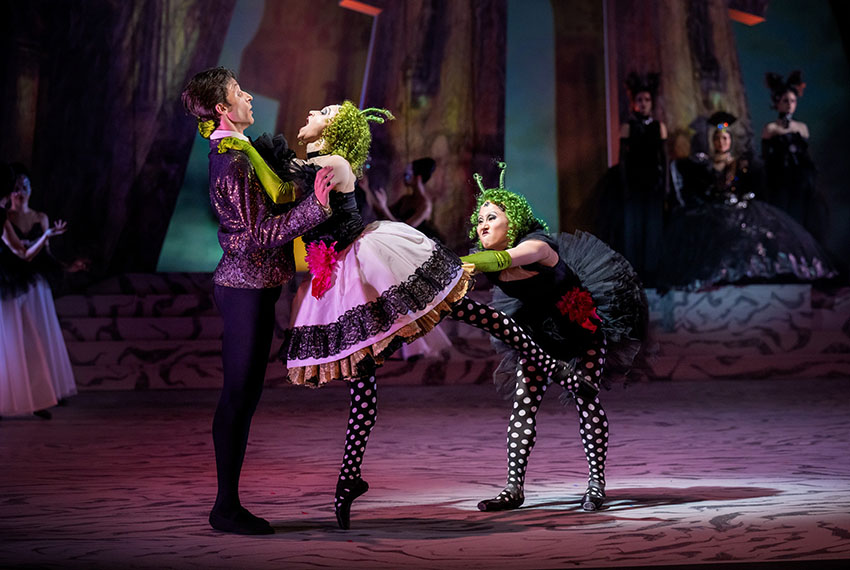 The Director/ Headmistress of the care home, Daria Ivanova, and the two sisters, Natalie Ogonek and Kaho Yanagisawa dressed in a stunning range of Lacroix’s haute couture excellence, have a wild time providing constant comic relief.

The Four Seasons have some of the most challenging choreography. The pompoms and frills on their very elaborate costumes were fortunately well secured as they execute every trick in the book, inside, outside, reversed and repeated with batterie. Anna Cecilia Meyer as Spring, Dawid Kupinski as Summer, Ethan Watts as Autumn and Isabelle Maia dancing Winter all deserve credit. A mention for the two Policemen, Oscar Salomonsson and Anthony Lomuljo. Weirdly dressed in 1900 British police uniforms (the action is set in contemporary Stockholm) and given senseless mime, like the firing of rifles, it was a sad waste of great talent. 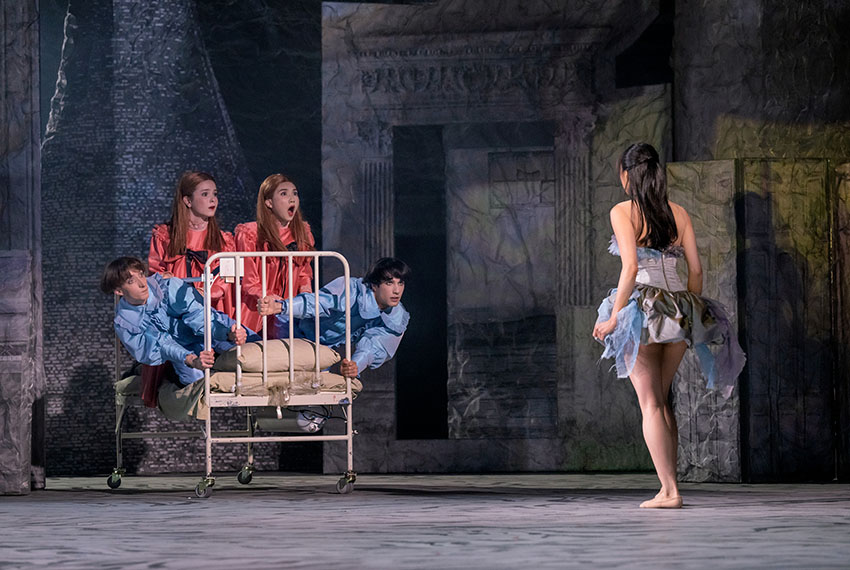 The orphans, Frej Ruhl, Eléa Bigot, Christiana de Blank, Jerémie Neveu, are invited to dance at the Prince’s birthday party but there is no invitation for Cinderella/Madeline Woo. Photo Carl Thorborg

The matinee on the following day, saw Haruka Sassa and Calum Lowden in the lead roles. In a more relaxed atmosphere, they brought a great deal of emotion to the roles. The ballroom scene, peopled by a corps in black and white chic, faces covered in silver masks is somewhat fragmented but the excitement of the mystery guest and the couple’s obvious passion especially in the pas de deux helped to focus attention.

They even brought warmth to the final, rather soulless, pas de deux framed by sepulchral grey granite. Nathalie Nordquist, vicious to those below and sycophantic to those above, was a delicious Headmistress flanked by equally comic sisters, Alessa Rogers and Mayumi Yamaguchi. The Seasons again did a fine job with the often-ungainly choreography notably Daniel Norgren-Jensen as Summer and Taylor Yanke, an impressive Winter. Preston McBain did the honours as the super nimble Prince’s aide.

English National Ballet’s Musical Director, Gavin Sutherland, was responsible for the musical arrangement. He did an excellent job of stitching together the patchwork of chosen musical extracts and the dancers had a good friend in the pit as he generously eased the orchestra over the sticky moments and occasionally stretched tempi to help a dancer. 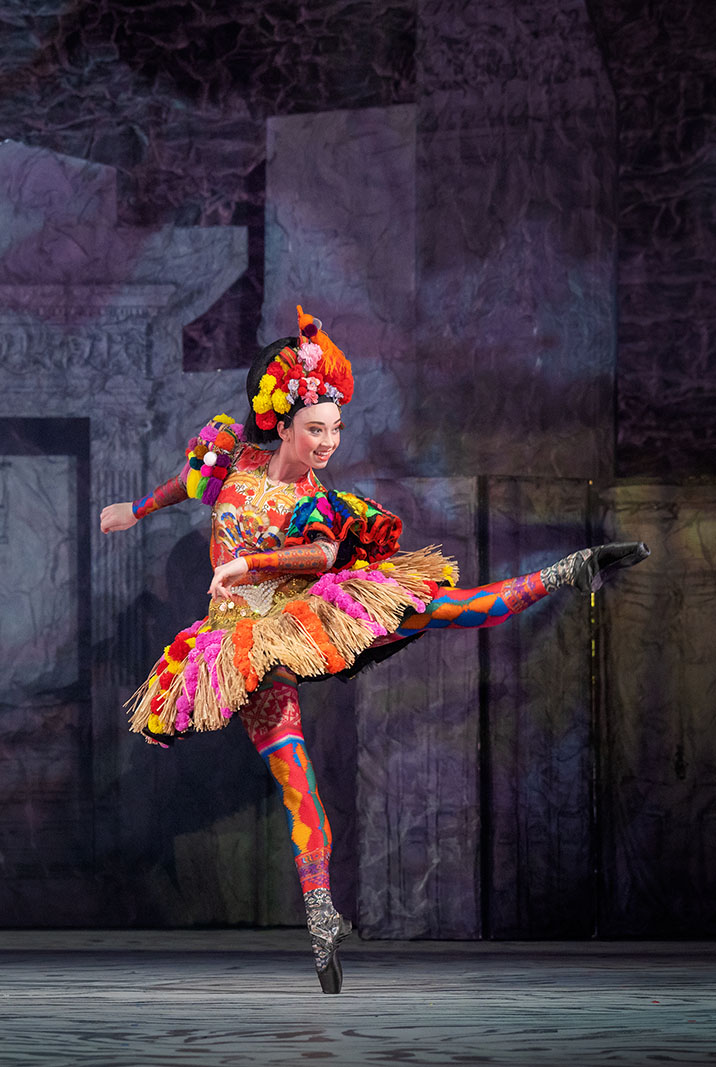 Tamara Rojo has successfully led the English National Ballet for ten years and now moves to lead San Francisco Ballet. She enjoyed an illustrious career as a dancer, dancing a vast amount of the classical repertoire. She draws on much of this, especially when choreographing the solos which results in a lack of stylistic integrity. This is Rojo’s first full choreographic work. (She added incidental pieces to Petipa’s Raymonda that premiered in January.) Like many inexperienced choreographers, she has tried to fit in far too much at the expense of phrasing and structure. Choreography is unfortunately, not learnt by osmosis and we can’t expect even our greatest dancers to naturally have choreographic talent. It is a pity, with the wealth of Swedish choreographers, that director, Nicolas Le Riche did not look closer to home.