Woolf Works – or does it?

LONDON is the place for tradition: museums, changing of the guard and the Queen. The Royal Ballet also does tradition rather better than modernity. When Wayne McGregor was appointed resident choreographer in 2006 the company lurched into the future but never seemed fully at home there.

McGregor’s latest ballet Woolf Works references the writing of Virginia Woolf. It has three acts, the first and third with serious intent and a middle act (Orlando) that is a Baroque fantasy in gold lamé with a lighting design (by Lucy Carter) to rival Bollywood splendour. Woolf’s distinctive writing marked a turning point in English literature and it was this voice, in this case a distinctive choreographic voice, that was barely in evidence.

Departing from his mean and lean contemporary style and borrowing extensively from the ballet vocabulary, the movement hung on the dancers like borrowed clothes that didn’t quite fit. An inaccurate fifth position simply looks sloppy. It needs to be the real thing or to take on a new and different shape.

In a work that encompasses powerful design elements, the choreography needed a stronger voice to achieve balance, especially in the second act, that became a presentation of sound and light. However there is a saving grace: the magnificent Allesandra Ferri. At any age she is an artist to be reckoned with and at 52 she still has the elegant sensitive feet, fluid movement and always her great heart that embraces the furthest reaches of the Opera House.

Wayne McGregor has a sterling cast.  In the second act he dispenses with narrative and shifts to the ground where he is most comfortable in a series of hard edged duets.

The dancers commenced wearing bulky costumes which they thankfully stripped off piece by piece. Natalie Osipova, who often seems too emotional for McGregor’s abstraction, gave her best while Steven MacRae, Melissa Hamilton. Matthew Ball and Eric Underwood were in their element.

Carter’s lighting could be in a line for a choreographic award as multi-coloured lasers danced around the tiers of the auditorium and fierce lights dissected the stage.

The third act, backgrounded by a sensual video of slow motion waves, was mesmerising especially when the sound of crashing waves (in real, unsynchronised time) was replaced by Max Richter's score. Here at last was something of the quality Lytton Strachey found in Woolf's writing: the fluid style and words that float. It found particular resonance in Ferri, standing alone centre stage or in the final slow duet with Federico Bonelli. Even in stillness she conveys depth of passion that surge below the surface and in these moments, the evening became memorable. 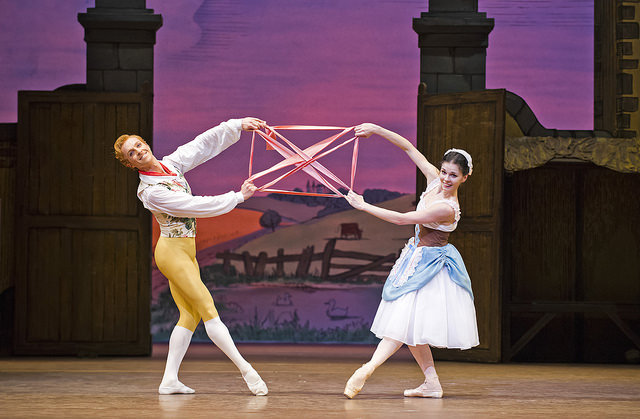 An English treasure
Frederick Ashton’s La Fille Mal Gardée is an English treasure and the Royal do it justice. Choreographed in 1960 and loosely based on Jean Dauberval’s scenario it has all the right ingredients: two brilliant central roles, plenty for the corps and a handful of superb character parts.

The performance on 5 May, streamed live and broadcast internationally, was also enjoyed by Swedish audiences and at the Opera House there was a distinctly festive atmosphere. An excellent cast was boosted by the delicious Natalia Osipova as Lise. Her powerful jump was a distinct asset and in the mime scene where she acts out her longing for marriage and children, her charm was palpable.

Steven McRae as Colas has given better technical performances (but this is nit-picking, his second best is better than most dancer’s best) but the subtlety he brought to the comedy moments, and there are many, was a joy.  There was a wonderful rapport between the two who kept their cool in handling the plethora of props triumphantly.

Philip Mosley as Widow Simone brought pantomime relish to the clog dance while adding subtle touches throughout to make a very real mother. The role of Alain, the village ‘idiot’ is problematic in our more sensitive age and Paul Kay tackled this full-on making a feisty character while deflecting the pity through showing more affection for his red umbrella than for Lise.

The chickens, and Michael Stojko as the cockerel, were also top rate featuring some of the brightest new talent and adding to a highly enjoyable evening.