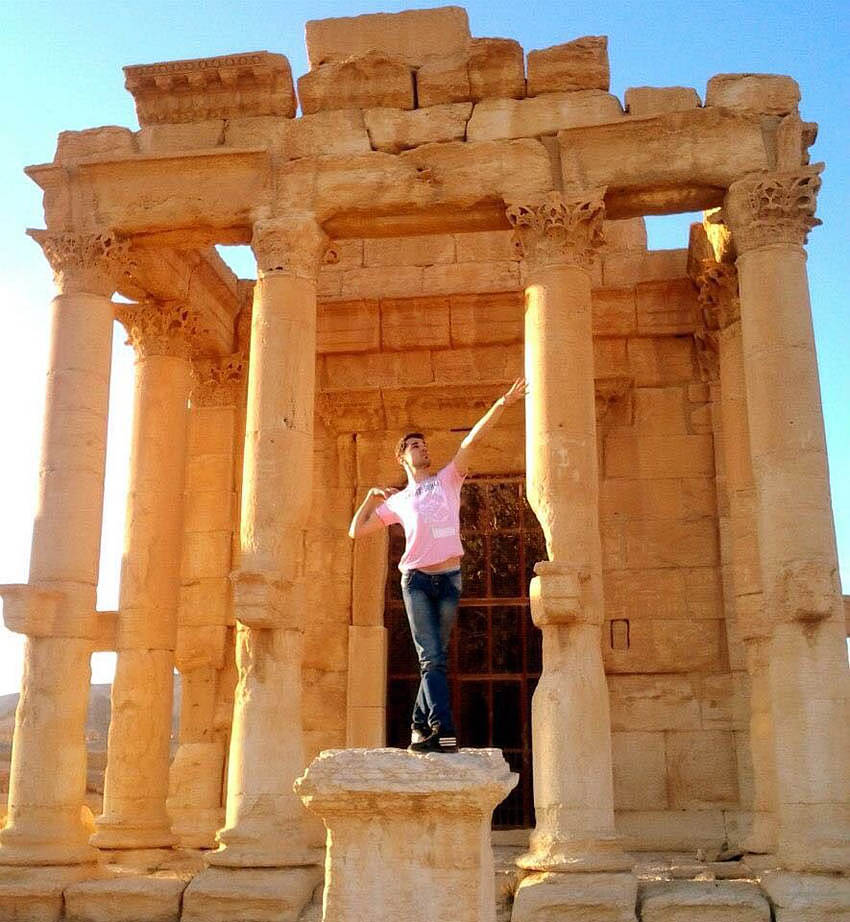 “Dance is my passport and because of dance, I am alive”

Few dancers at the beginning of their professional career have been as fêted as Ahmad Joudeh, the Syrian-born, Palestinian dancer. When we met in Amsterdam at the Muziektheater, home of Dutch National Ballet, he had just returned from Paris and a dinner date with President Macron. 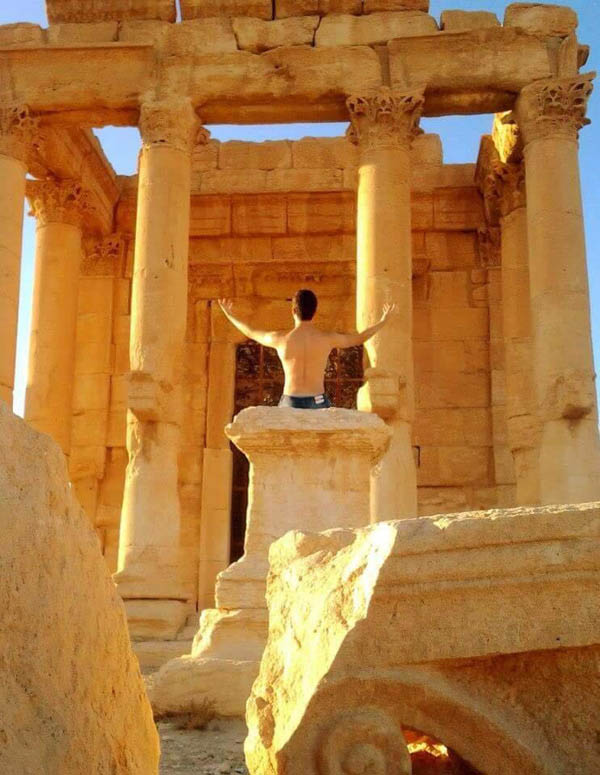 Conversely, few dancers have had as traumatic and dangerous a path to reach professional status. Born in 1990 in the Yarmouk refugee camp in Damascus, he was on the frontline as the Syrian civil war raged around him.

In a culture that saw dance as only for women, and even then, viewed with suspicion, he faced fierce societal opposition and his father’s anger.

That he has achieved so much is a tribute to his tenacity, talent and great passion for dance.

The struggle to be a dancer, especially for boys, is well documented, but Ahmad believes that dance found him. His father was a musician and taught him to sing as a child.

At the age of eight, he performed at a school festival and saw a group of little girls dancing ballet to Tchaikovsky’s Swan Lake.

“It was very basic, but I wanted to dance like them. I believe dance is for everyone – not just girls. Swan Lake is famous in Syria, like everywhere, so I found the music and tried to teach myself but I had to keep it secret from my father.”

At 16, and self-taught, he auditioned for the Enana Dance Theatre in Damascus. “I think they liked me because I was tall”, he said. The Russian ballet mistress, Albina Belova, recognised his potential and while performing with the company he received formal training in ballet.

At 19 he was able to enrol at the Higher Institute for Dramatic Arts. All the while he faced his father’s disapproval and one beating was so severe his leg was nearly broken. “A man dancing ballet is the worst thing in the Arab world.”

When the family moved to the relative safety of Palmyra, he stayed on in Damascus living for two months in a tent on the roof of a damaged building to continue his studies.

He was rewarded by graduating as the top dance student in his year.

While studying, he continued to dance with Enana, touring throughout the Arab world. It was the Arab version of So You Think You Can Dance in 2014 that brought him to public notice, gave him family approval and changed his life.

Dutch journalist, Roozbeh Kaboly, saw Joudeh’s photograph on Facebook and went to Damascus to film him dancing in the ruins of Palmyra – a highly dangerous venture for both of them.

However, nothing would prevent Ahmad from dancing. He has a tattoo on his neck that says: “Dance or Die”. He reckoned that if ISIS captured him they would see his defiant message if they chose to behead him.

The video was viewed by millions across the globe on YouTube after it was screened first on television in The Netherlands. Ted Brandsen, director of Dutch National Ballet, saw it and was captivated by this dancer who showed such total commitment. He set up a fund that raised €25,000 to bring Ahmad to Amsterdam on a study visa. 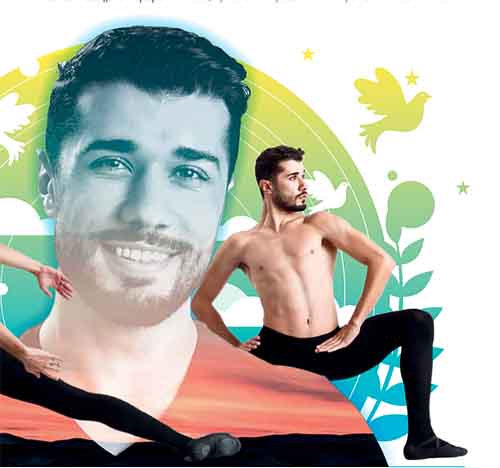 A specially designed programme introduced him to jazz and hip hop in addition to his ballet and contemporary classes at the High School of Performing Art, and he is now concentrating on choreography, performing and teaching.

While his classical technique is not at company standard, Ahmad has been embraced by the dancers, joining in classes, making many friends and performing character roles in Coppélia and The Sleeping Beauty.

He has had great success with his own choreography, performing to an audience of 14,000 at Amsterdam’s largest venue, the Ziggo Dome, in addition to invitations to dance in festivals in major European cities.

His passion for dance extends to teaching. Previously in the Yarmouk camp Ahmad taught dance to children, including those with learning difficulties. He spoke with great fondness of his young pupils and the latent artistic talent in Syria. His hope is that the fund will also help these artists.

In Amsterdam he continues his children’s classes in addition to ballet classes for amateurs based on the philosophy: “You don’t need to punish yourself in the ballet class, enjoy it and fly. The joy of dance is more than the technique”. Working on ideas he formulated in Lebanon, he now directs workshops for refugee children, based on his experience with dance and how it can heal by releasing emotions through movement.

Ahmad believes that dance must come from the soul if it is to move people and through dance he can be a messenger for his people.

His invitation from the French President came about because of the huge publicity surrounding his performance in front of the Eiffel Tower. “A Syrian singer, Sanga, took my words from the documentary and made a song and I arranged a dance to it.”

Ahmad recounted to me his emotion when dancing to the phrase, “I was free in the jail” which had forced him to interrupt his rehearsal. “It took me back directly to the moment I had said it and it hurt so much, I couldn’t breathe.”

He pauses for a long time.

“It is hell there. My mother, my brother and my sister are still in the house on the frontline. They have been attacked twice because of my publicity and they only survive by chance. I can help them financially, but I cannot protect them.”

Ahmad Joudeh inhabits a world that is part dream, part nightmare. As all the doors to dance success open, he is still stateless.

With no passport, he can only travel when he has an invitation and a visa, “but, when they see my papers at the airport they make me wait. They check my travel documents many times for no reason. There is no respect for humanity in treating people according to their documents.” 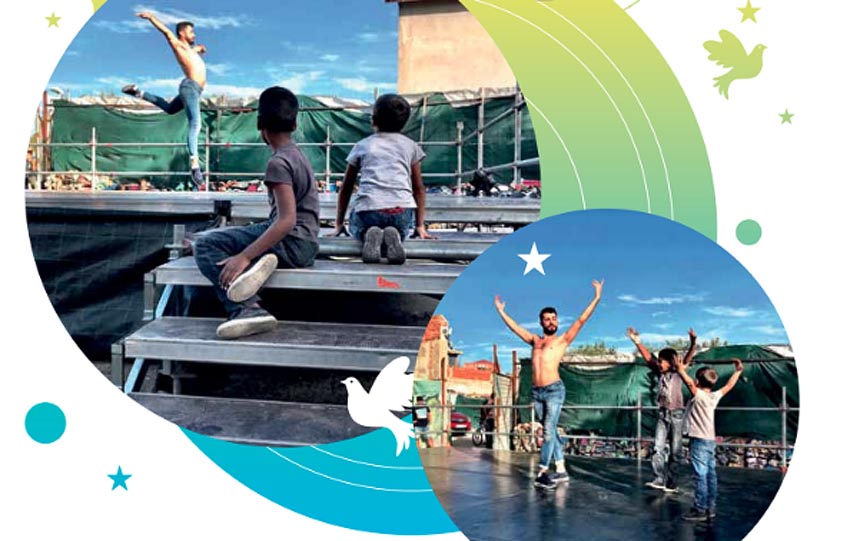 When I asked him what was best about Amsterdam the answer came directly: “Freedom. I can walk from
the gym to the studio in my training clothes and nobody judges me. I like the very direct way the Dutch deal with people. It makes things very easy.”

However, his independent spirit struggles with the system that tries to classify him as a refugee. “I’m a dancer. Dance is my passport and because of dance, I am alive.” He has bold ambitions for the future: “I want to direct the Syrian National Ballet, with Syrian dancers in a peaceful Syria.”

Ahmad is now, thankfully, reconciled with his father. “He is so proud of me now. He said the night he beat me, he came home angry with people taunting him about his son, the dancer, and then he found make-up in my bag.

On my last visit, he started to dance with me, doing some of the moves he had seen in my video. I started to cry and had to run and hide in the toilet.

You need to let the burden of hate go or you will never find peace with yourself. Eleven years without talking to me, or even looking at me because I was something shameful – and now he is dancing. 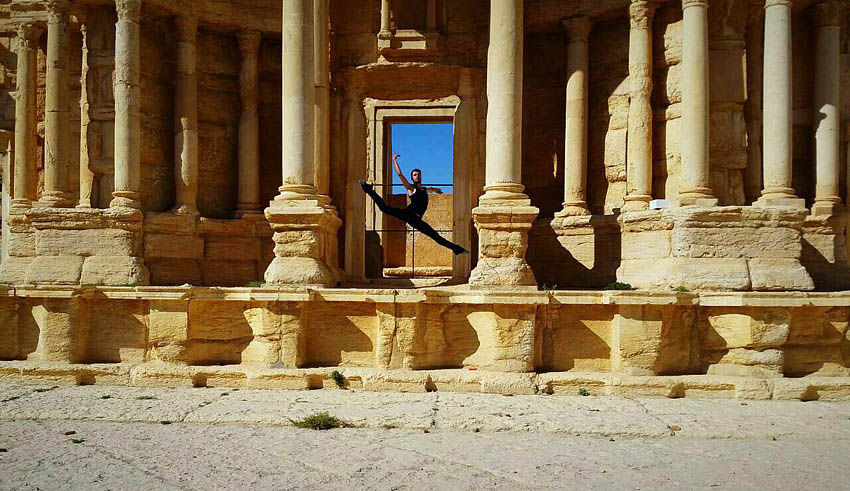 He is an artist, like my brother, so for me it was really strange that he was against dance. “In my way of thinking, if you are not man enough on stage, you are not beautiful. The beauty of a pas de deux is when the woman is enjoying her femininity and the man, even if he is gay, is a real man.

So, that is what you enjoy to see and there is nothing to be ashamed of. Whatever your personal life is – keep it in bed!”

Ahmad’s story has similarities with Billy Elliot, but with the added danger of bombs, gunfire and sudden death possible at every street corner. At the heart of each story is the passion of a young man and the healing power of dance.

This article was first published by Dancing Times, and Dansportalen has been approved to publish it.